You are here: Home / Blog / Inc-loo-sivity

Human beings often show kindness and compassion to their light-sensitive fellows; but their good intentions can be hamstrung by moronically designed lighting technology.

It’s July 2019 and I’m feeling nervous but hopeful. I’ve got an appointment with an immunologist who is a specialist In Mast Cell Activation Syndrome, a newly identified immune system disorder. Today might be the day when my decades of weird, shifting sensitivities finally start getting tied together and given a proper name. 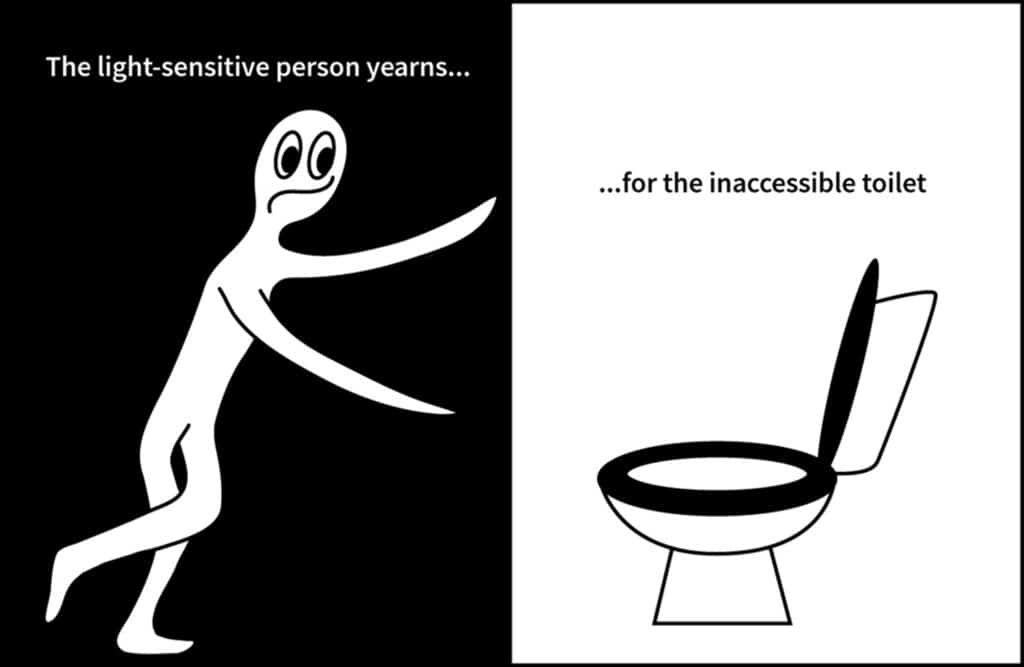 The appointment is in a private hospital in the South East (when it comes to MCAS, the NHS is lagging) and the journey takes a bit over an hour. I’ve phoned ahead, to explain about my bad reactions to modern lighting, and the hospital has sounded helpful and accommodating. When I arrive with my husband, we’re marched straight through reception, past the normal waiting area and into what looks like an unused treatment room. It has no window, so with the door slightly open, we sit in three-quarter darkness. But that’s fine with me. My husband listens to the radio. I wander round the room, breathing in that spirituous hospital smell, peering at mysterious notices on the white fitted-kitchen-type cupboards, trying to guess what sort of procedures are carried out on the adjustable couch.

When the consultant is ushered into the dark room by a nurse, he greets us warmly. “Do you want to have the consultation in here,” he says, “or in my room, which has a window, but I’ve switched off the lights?“

I’m quite keen for him to be able to read my notes, including the tortuous history of sensitivities he asked me to submit in advance. So we go to his room. As we talk, I keep apologising for the unusual nature of my reactions, having become used, over the years, to incredulity, scepticism and dismissal. But again, he’s unfazed. “I’ve seen MCAS cause all kinds of weird reactions. Let’s see what the tests say.” He fills in forms and explains what tests I’m to book where.

When we finish, I’m full of hope. I just need to go to the loo before the long drive home. And here they are – a row of four modern, inclusive toilets, doors opening directly onto the corridor, each its own gender-neutral, fully enclosed little room.

I open a door and immediately close it again, because the room is filled with intense white light. I move to another cubicle and try that – it’s unlit, and there’s a little window, because it’s the end cubicle. Hooray, I think, this is the loo for me.

I step inside, and suddenly the room is flooded with intense white light. I retreat, open the door of the loo next door – it’s dark – step inside – it lights up again.

I must be a bit slow on the uptake, but finally the penny drops: motion sensors. I scan the walls for a switch to turn the arrangement off, but there is only a square metal box with a smooth belly, innocent of any rocker or knob. Getting to that toilet without tripping the sensor would require some Mission Impossible feat of agility.

I long for the old-fashioned type of toilets, where a large room is divided up using partitions that don’t go all the way up to the ceiling. I’ve usually been able to find at least one subdivision without a light directly overhead. But this new kind has defeated me.

I explain the problem to the nurse at reception. “Oh,” she says. “Oh dear. No, I don’t know how to override the system.“

“What about other toilets, in other parts of the building?“

The nurse – whose vocation is to care for people – has been totally disempowered. I want the right to bear arms. If I lived in the States, my revolver would be out of my backpack by now and I’d have shot the damn bulb out. What’s more, I’ve been under these corridor lights for too long, even though I’m fully dressed and wearing a hat. I’m starting to react, a sharp burning sensation spreading over my skin.

There are times to take a stand, call for the building manager, take out one’s LightAware leaflet and card, initiate formal complaints. There are also, dear reader, times for beating a hasty retreat. This is one of the latter, unless I intend to urinate into one of the hospital’s tasteful potted palms.

We drive home. Fast. I make it.

There’s a wider lesson here, as well as the non-inclusive nature of motion-sensor toilets: who do we want in charge – people or tech? Automated systems can never adapt themselves to all the nuance and diversity of people’s actual lives. There should always be a way for human beings to retake control – unless we want judgement, empathy, compassion and agency to leach slowly from our world.

A few months later I am diagnosed with MCAS. I’m official – at last!

The EU has just announced funding to examine … END_OF_DOCUMENT_TOKEN_TO_BE_REPLACED

Light pollution can be hindrance if it’s … END_OF_DOCUMENT_TOKEN_TO_BE_REPLACED