You are here: Home / Blog / Why LEDs are uniquely unsuitable for vehicle headlights

Just over a year ago I was driving back from Cumbria to Edinburgh. Just after leaving the M74, a Porsche SUV with LED headlights at the same height as my rear window approached from behind me, then followed me at a distance of about twenty yards. The glare from these headlights in my rear-view mirror was so bad it caused me physical pain in the eyes. I hurriedly turned my rear-view mirror askew to stop the pain, then pulled over as soon as I safely could to let the SUV pass. I needed to wait 10 minutes for my eyesight to recover and after readjusting my mirror I headed home to Edinburgh with a blinding headache. 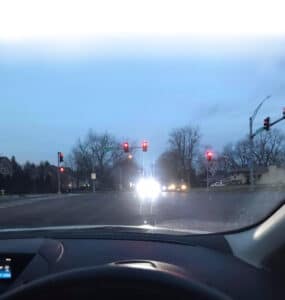 Turns out I’m not alone. Research published by the RAC in March 2022 found 89 per cent of drivers think that some or most vehicle headlights on the UK’s roads are too bright with 88 per cent saying they get dazzled by them while driving. The problem is getting worse with 63 per cent saying it’s happening more often than a year or two ago and 64 per cent thinking they risk causing other drivers to have collisions as well as 67 per cent unable to tell if the headlights of oncoming vehicles are dipped or on full beam. Since 2013, there have been 293 accidents a year on average where dazzling headlights were a contributory factor.

The human eye has evolved to allow it to adapt to a wide range of light levels from bright sunlight to almost total darkness. But it cannot adapt in a short space of time. Comfortable vision requires a limited range of light levels at any particular time and excessive changes and contrasts in light levels in a brief period cause disabling glare. The problem with LED headlights is that they are incompatible with dark adapted human eyesight – particularly for older drivers – they are too bright, too blue, too ‘concentrated’ and blinding over too long a distance.

Too ‘concentrated’: A particular problem with LED headlights is that light is not distributed evenly across the headlight’s beam but is concentrated in the centre (on the axis). This means that vehicle headlights that appear dimmed on approach can suddenly become blinding if the centre of the beam shines directly into a driver’s eyes, for example when a vehicle travels over the brow of a hill or round a bend. This is made worse by manufacturers taking advantage of the high luminance of LED chips to make very small headlights with a very narrow piercingly bright centre to the LED beam. This is mainly done as part of ‘branding’ to make cars stand out in the market, but it reduces safety by increasing LEDs headlights’ capacity to create disability glare.

When drivers are exposed to the centre of a LED headlight beam their pupils quickly constrict to adjust to the bright light. But the dilation of the drivers’ pupils to readjust to darkness happens more slowly, meaning people ‘drive blind’ for a time. The Royal Society for the Prevention of Accidents says: “Between the ages of 15 and 65, the time it takes to recover from glare increases from one to nine seconds.” A vehicle traveling at sixty miles an hour can travel over 250 yards in this time. This headlight-caused night-blindness is one reason many older people choose not to drive at night.

Too blue: The bluer spectrum of light from LED headlights disables the night adapted vision of the human eye to a much greater extent than that of conventional halogen headlights – pupil size is more strongly correlated to blue light than yellow light.

Because of their small size, LED headlights can be made up from multiple units and portions of the lamp can switch on or off automatically depending on road conditions. This is known as matrix lighting. In theory this could give drivers maximum ‘main beam’ lighting for the prevailing conditions without dazzling oncoming drivers. But on rural roads, matrix lighting is more likely to blind oncoming drivers. This is because human drivers can see approaching vehicles on a dark country road and dip full beam headlights, even if the other vehicle is round a bend or over the brow of a hill. Matrix lighting systems don’t have this human anticipation and only switch off when they ‘directly sense’ the oncoming headlights – too late to avoid blinding the oncoming driver. Also, if you are a cyclist or pedestrian, matrix headlights don’t recognise you at all and you are completely dazzled.

The explanation given by some people in the car industry is that these problem headlights are badly adjusted, so they are not properly directed at the road, and that simply correcting this would end the issue. This might be reasonable if we all drove on straight flat roads all the time and headlights were all the same height. Unfortunately, this is not the case – British roads have bends, bumps, hills and dales which turn LED headlights into a blinding danger for drivers.

An extreme example of LED glare is that of daytime running lights. These are clearly visible to other road users and pedestrians. At night, if they do not dim, they can be dazzling – more so for young children (who have higher transmission of light through to the retina) and older people (who will suffer from scattering of the light, within the eye).

Given the huge amount of legislation over the years devoted to improving road safety – seatbelts, banning drink driving, not using mobile phones while driving, as well as improved safety design such as crumple zones and airbags, something is going very wrong if vehicle headlights are becoming so bad as to make so many motorists complain that they are dangerous and others give up driving at night. It is about time the UK and other governments got a grip of this issue before more accidents are caused by drivers being blinded by these headlights. They need to set realistic safety standards for vehicle headlights (and other vehicle lighting) and ban those that don’t achieve those standards.

This mailing is shorter than usual as we are … END_OF_DOCUMENT_TOKEN_TO_BE_REPLACED